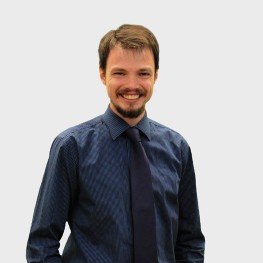 Rick has been a member of Wycliffe since 2013, which is the same year he came to CanIL to start the Masters of Applied Linguistics and Exegesis. In 2014, he met his wife Hannah, who also came out to do a Masters degree at CanIL, and they were married in 2016. Rick finished his degree in 2015 and has been teaching Articulatory Phonetics (Ling 310) at CanIL since then. Recently, he was officially assigned to teach at CanIL while he and his wife prepare to go overseas to the Democratic Republic of the Congo (DRC).

Rick is excited that he and his wife have the privilege of being involved at CanIL before heading to the field! He has already seen a number of his former students head to the mission field where they are using the skills that they learned at CanIL. He is grateful for this opportunity to serve in the Bible translation movement while he prepares to go overseas. His passion is to see people around the world receive the Scriptures in their own languages, so that the Church may continue to grow and be healthy!

Interesting facts: Rick loves music, and plays trumpet and sings in a choir. He also loves reading, especially The Lord of the Rings and any other literature by J.R.R Tolkien. He and Hannah have hosted several Lord of the Rings marathon parties.

2012. Bachelor of Arts in Strategic Ministries (with High Honours), Millar College of the Bible.

2010. Bachelor of Biblical Studies (with Honours), Millar College of the Bible.