The Not so Simple Truth about the Complexity of Language Use

The Not so Simple Truth about the Complexity of Language Use

By John Carter
This is a guest post by John Carter who works as a language surveyor in Papua New Guinea, one of the most linguistically diverse countries in the world. John and his wife Katie are former students of CanIL, who later returned for a short time in 2013 and helped teach the Language Survey course with instructor Randy Lebold.

I like simplicity. I like being able to crystallize a concept, define it with a few words, wrap my head around it quickly. Even if I know reality is more complex than I’m portraying it, I still prefer to work with the simple version.

As I write this page, I’m attending a lecture at a conference with colleagues in Papua New Guinea. The lecture, entitled “The Way We Talk” reminds me that people are not simple. Nor is language. The field of sociolinguistics, which studies people based on their social and linguistic characteristics—and, how they affect each other—is crazy complex! As soon as you make a statement about a people or language, you have to amend it. Grumble. The lecture this morning is a reminder that, in many parts of the world, people have a variety of languages and identities they can choose from.

Sound like a weird idea? Consider Akin, a typical man from the Suau speaking area near the southeastern tip of Papua New Guinea. He knows, at least, English, Motu, Tok Pisin,

and two dialects of Suau (Lausaha and Eastern Suau). So he has at least five speech varieties to choose from, and every time he opens his mouth, he is consciously or subconsciously making a decision about which to use.

If Akin meets a foreigner like me, he will wish to impress me by using English. This shows that he has a high level of education, possibly high school (yes, that’s high for Papua New Guinea). He is showing he is a modern, educated Papua New Guinean, knowledgeable about the wider world.

If Akin meets someone from the Highlands, he will be a bit nervous. Coastal people view Highlanders as being aggressive and overbearing. Akin will choose to use Tok Pisin to identify with the Highlander and to show that, despite being from an area where Tok Pisin is only now making inroads, he is up with the times and can converse in Papua New Guinea’s most widespread language. 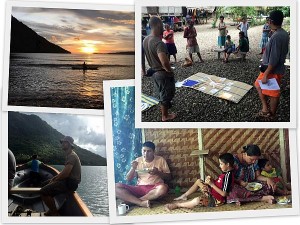 If Akin meets someone from Gulf Province (to the northwest), he may choose to use Motu. But he may not. Motu is declining in use and prestige, so even if two people share it, they may choose not to use it. He may choose to use Tok Pisin or English with this person.

If Akin meets someone from within the Suau speaking area, he has yet another choice to make. Akin may choose to use the Eastern Suau dialect even though he is from the Lausaha dialect area. Eastern Suau is the higher prestige dialect, perhaps because of the New Testament translated in it. Many Suau speakers have extensive exposure to Eastern Suau through the church. Using this dialect could have the affect of identifying with the other person (if he is from Eastern Suau) or of showing himself to be a church person. In fact Akin could choose to use it to communicate more clearly since this dialect may be known by his conversation partner, whereas they may not be able to understand each other well if they each use their own dialect. If they can’t understand each other’s dialect, though, it’s more likely they’ll both use English. However, because Suau people travel freely within the Suau area, many can understand each other’s dialects, so Akin and the person he is speaking with may each choose to speak in their own dialect to one another.

Believe it or not, Akin’s context is far from the most complex situation present in the world today. When it comes to language and people, the world is NOT simple. There may be a time to over-simplify, but when decisions are being made about how to meet the language related needs of a particular speech community, we must remember that there are lots of ‘ands’ and ‘buts’ involved. When we speak of serving people, we need to remember they too are multifaceted. An oversimplified solution to meeting their needs won’t satisfy. When making decisions about language development and Bible translation, we need to keep the whole person in mind.